Looks like the audio tag is stripped out. Viv's bumper.

I've come back to playing around with Fargo a wee bit recently, working on my walknotes blog mostly. I am guessing this is not the best use of Fargo, as there is not a lot of text in the post.

Last weekend I played around with adding an item to my Script Menu to add flickr photos to the outline. I've a couple of semi useful scripts, one searches for photos tagged with the current headline

The above was found by selecting Fargo and invoking the menu.

The second script just addes the last 10 of my own photostream which allows me to delete the ones I don't want. Here is a mushroom. 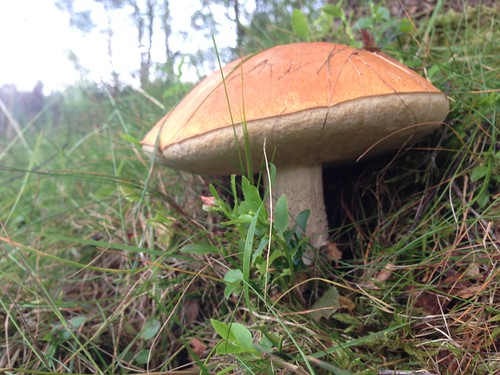 Fargo My Flickr-menu and Fargo Flickr Search are works in progress.

This is pushing my baby steps JS some. I wanted to post to my blog, but not to use p tags and li tags but h3 and p. So I took the Wordpress script edited it to change the tags and pasted it in my menubar script. No joy.

I repeated the exercise, but just pasted it into the browser console, result

So I've save the script in a file in dropbox and linked to it in the script menu:

From: Writing larger scripts for Fargo.

Which seems to work. I get EOF errors when putting the whole script in my script menu. I'd prefer it to work there. I am guessing I do not understand JS enough at the mo.

I guess you could put a whole set of functions in a file, link from script bit in the Settings and call from the menus.

I imagine having a few different scripts for different types of post. The one above for an organised in sections with headers post. One with block quotes etc

Just a couple of days ago I was worried, then not so much. This evening I am reading about Fargo 0.97 and 0.98 and it looks like development is going like a train.

The performance problems seem to have gone away too.

There is some scripting stuff added in that looks pretty interesting and requiring a bit of reading and thinking on my part. I've got Dave's test script menubar in place and have tried a few one liners by running from an outline. I keep opening up the console to paste and try a script and then remember that I can run it in Fargo!

One thing I'd like to be able to do in fargo, when using it as an editor from my WordPress (sort of) blog, I'd like to be able to add an attribute renderAs, this would when publishing to the blog swap out the p tag for whatever it is set to, in my case mostly h3 or blockquote. Even better if it would change the style of the outline and/or add an outline.

Also sound like Dave is very committed to the outliner and is will not go away any time soon.

If it does I'll still have the opml files. A quick think and wee test makes it look as if there should be some script to get the info out of these opml and into something else (wordpress) if Fargo was to shut down.

Other reasons to feel safe include dave's commitment 'not to break things' while making improvements, I tumbled that one when I saw it.

A couple of days ago, Dave posted this: Changes at Small Picture.

It seems a great pity as the fargo, trex combo seemed interesting and I was enjoying using it and exploring outlining a wee bit.

I guess relaying on two developers, with different remits is risky. I was using my walknotes blog here as a replacement for posterous I don't suppose Fargo/trex was a great fit for this as it is probably better for thinking and writing rather than posting notes and pictures. I am going to keep using it for now, but think about a couple of things:

Thanks to Jeff in the comment of the last post. I've now got #siteTimeZone "+1" at the top level of this outline and the times of posts is fixed. I'd still like to have UK date formats...

Each post has the date and time posted in the format, for example:

I'd like to use the day/month/year date format and the time to reflect my timezone.

Can we do this? I've searched the trex and fargo docs and can't find anything.

I've noticed posting in my walknotes blog that when I add html to show flickr photos the html is visible in the editor, but at some point, later on, it is rendered in Fargo as well as the blog.

I've not seen this documented, but I've not searched extensively.

Update from the comments here: Fargo questions from a non-techie

This seems to work for images and links but not H3 elements, object tags and the like.

I've been using Fargo fairly regularly at Walknotes. I've also got another outline which I am using to post to my regular blog.

The walknotes blog is not really especially suited to Fargo. but it is interesting to give it a run. Using it to compose posts for my main blog will hopefully improve the structure of the writing.

The Walknotes blog I've made a few customisations to, this one I'll just stick with what Fargo gives as it develops.